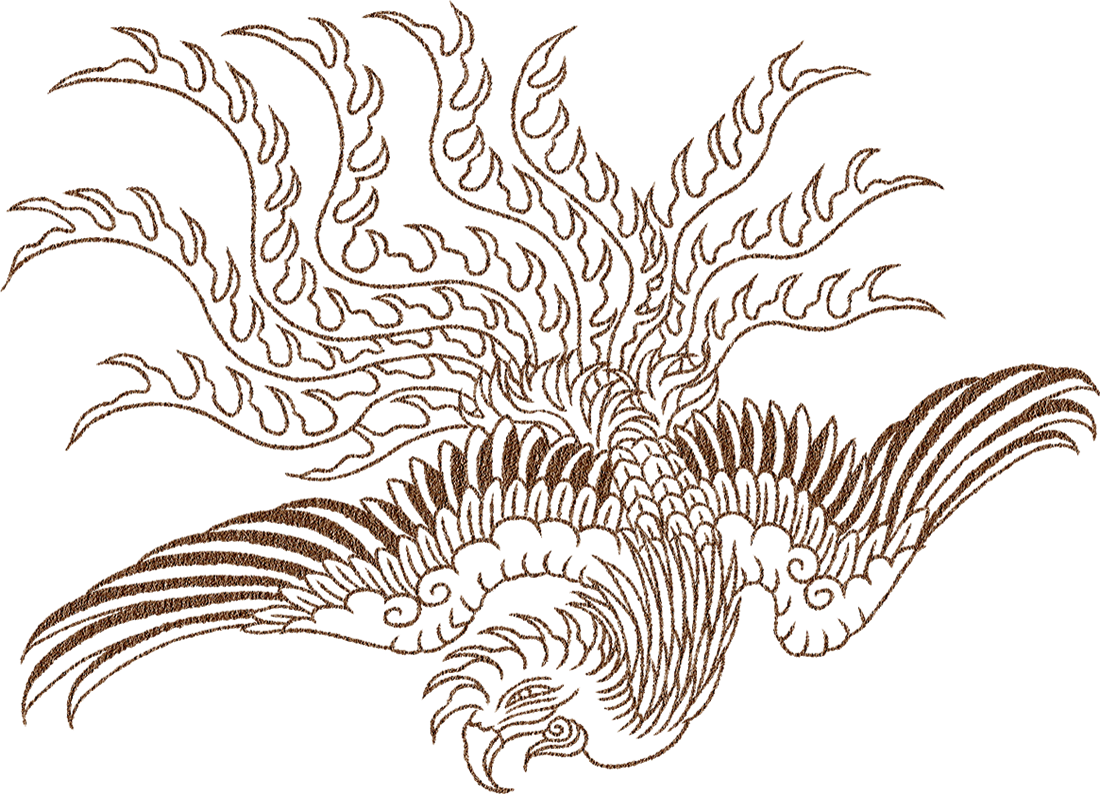 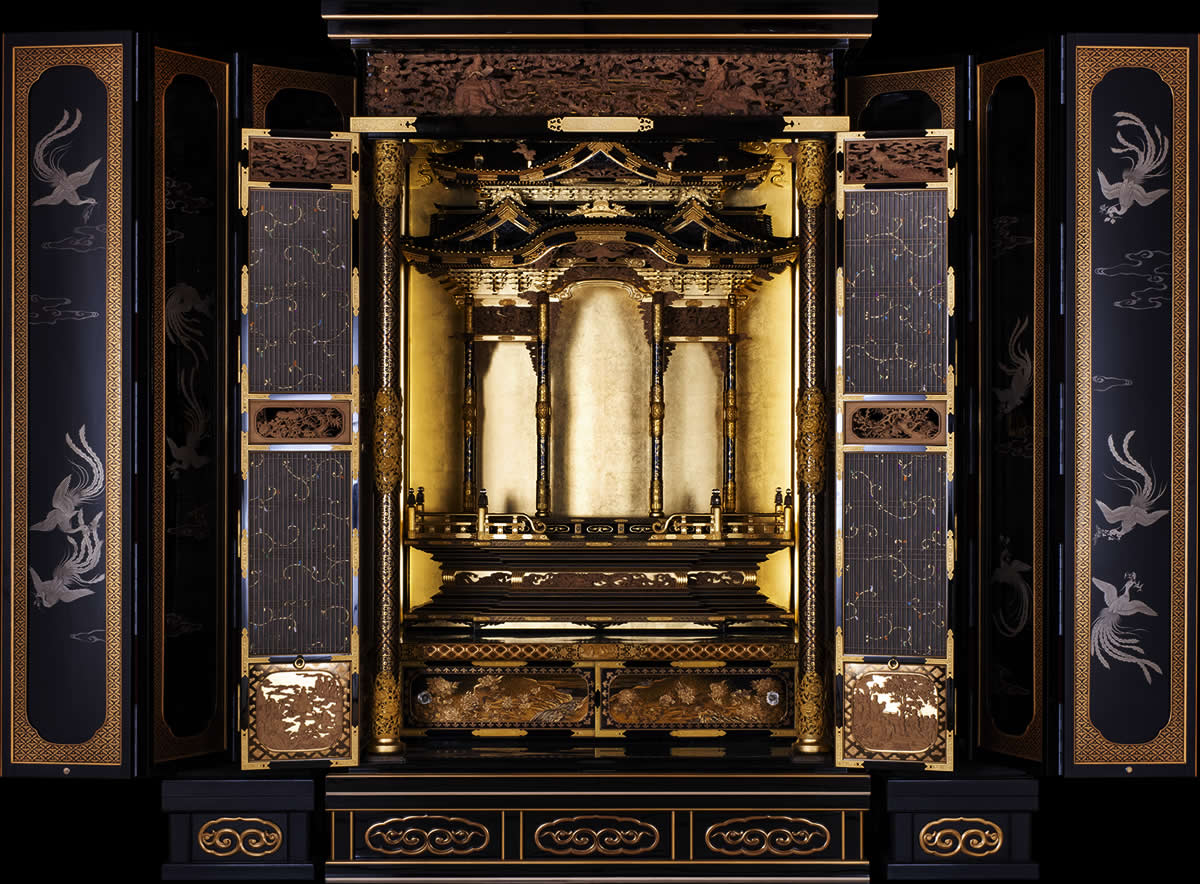 It has taken more than 100 years since I planned the production to get this far. It is clear from the fact that it incorporates the wooden sculpture of the second generation Rihachi Iwakura, a master craftsman of Inami sculpture who was active from the Meiji era to the end of the Taisho era. By combining the outstanding skills, discerning eyes, and many years of experience of the master craftsmen who lead each field, a Buddhist altar that could not be achieved before was born here. We hope that you will enjoy the essence of Buddhist altar culture through craftsmanship that can be said to be art such as palaces, wood carvings, foil carvings, lacquer paintings, lacquer painting, and metal fittings.

“鳳” means a rooster, “凰” means a hen, and in ancient times it was called “Tomo”. He is the head of an animal with 360 species of wings, and is said to appear only in the peaceful world governed by the Holy Tenshi. When the phoenix flies, its virtue prevents lightning and storms, rivers from overflowing, and vegetation from shaking. And if the phoenix flies in the sky, the warm bird will follow it, and if the phoenix dies, many birds will mourn. Since the phoenix is an auspicious bird, its design is used in many works of art and buildings. In Japan, the one on the roof of Byodoin Phoenix Hall in Uji City is famous. A lively phoenix is beautifully drawn on this Buddhist altar by lacquer work, and it was named “鳳凰 -HOUOU -(Phoenix)” in consideration of being a blissful bird that brings peace.

History of Buddhist altars in Kaga

There are two reasons why the production of Buddhist altars prospered in the Kaga area.

One is that Rennyo Shonin, who visited in the 15th century, spread the teachings of the Jodo Shinshu sect throughout the Hokuriku region and has been very deeply rooted among the common people.

The other is that a large number of excellent craft artists were brought up by the craftsmanship that was maintained by Toshitsune Maeda, the third feudal lord of the Kaga domain, and completed by Toshitsune, the fifth feudal lord.

The products made by these craftsmen were used for gifts and donations of lords and temples, and their beautiful gold leaf lacquer work and sculpture techniques were handed down to the Buddhist altars for the general public. 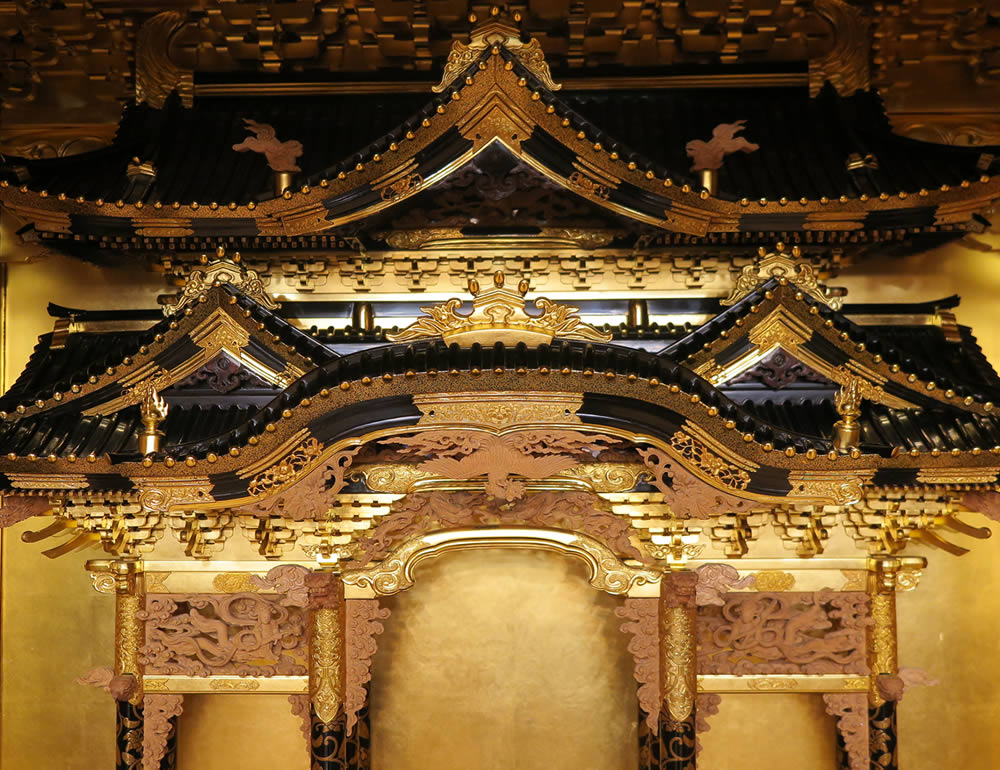 He studied under the 13th generation (Morisada) of the Yohachiro Tamura family, the originator of Inami sculpture, and became a son-in-law.

In 1886, he was appointed as the chief sculpture by Kyoto Honganji Temple.

He is one of the pioneers of modern Inami carving, which has made the name of “Inami-cho wood carving” nationwide. 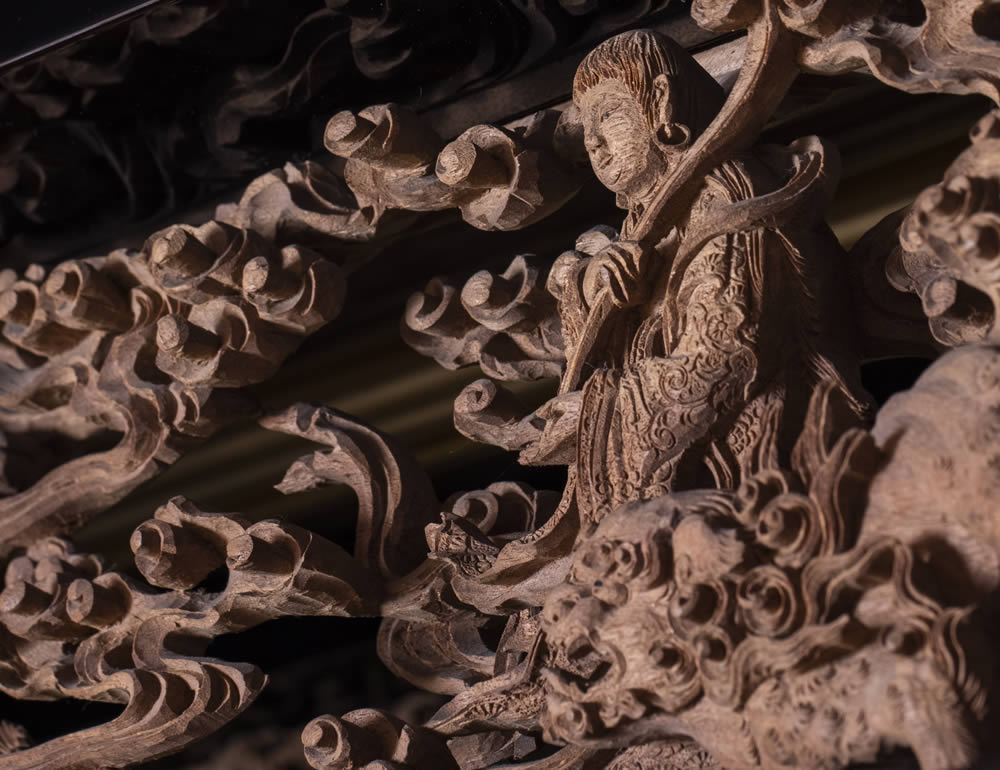 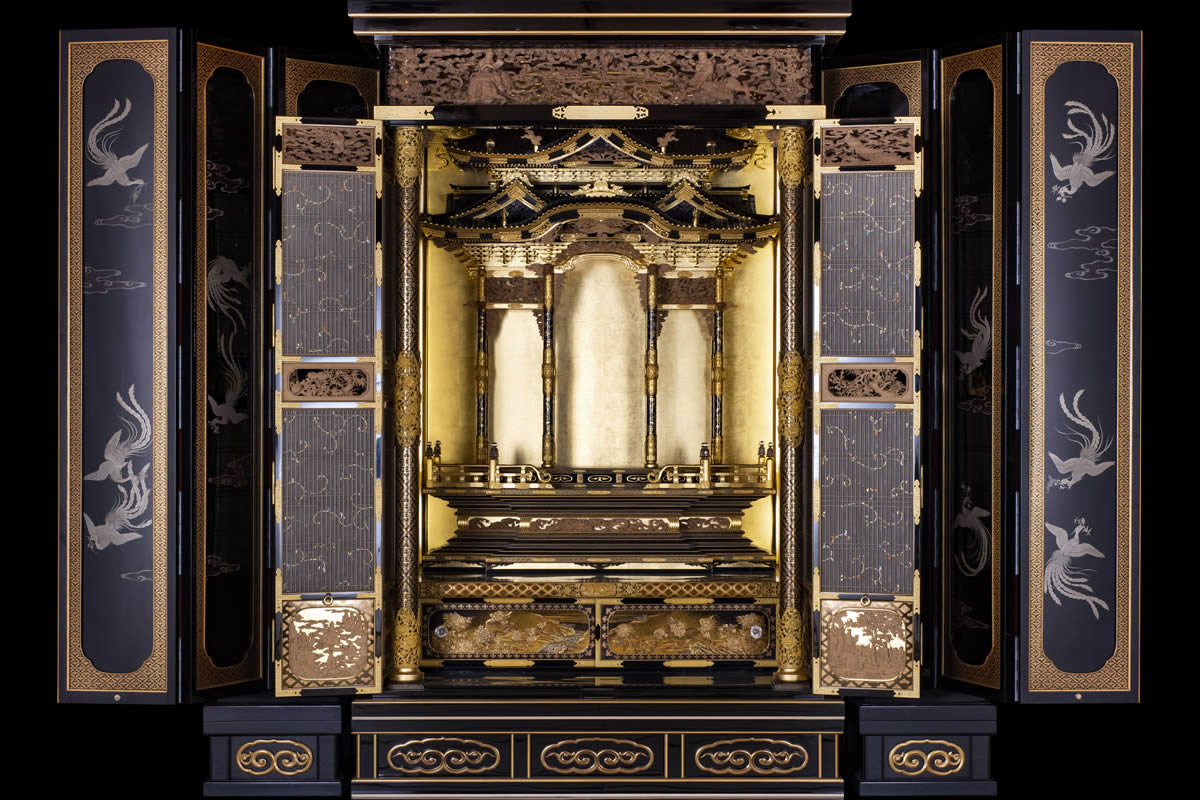 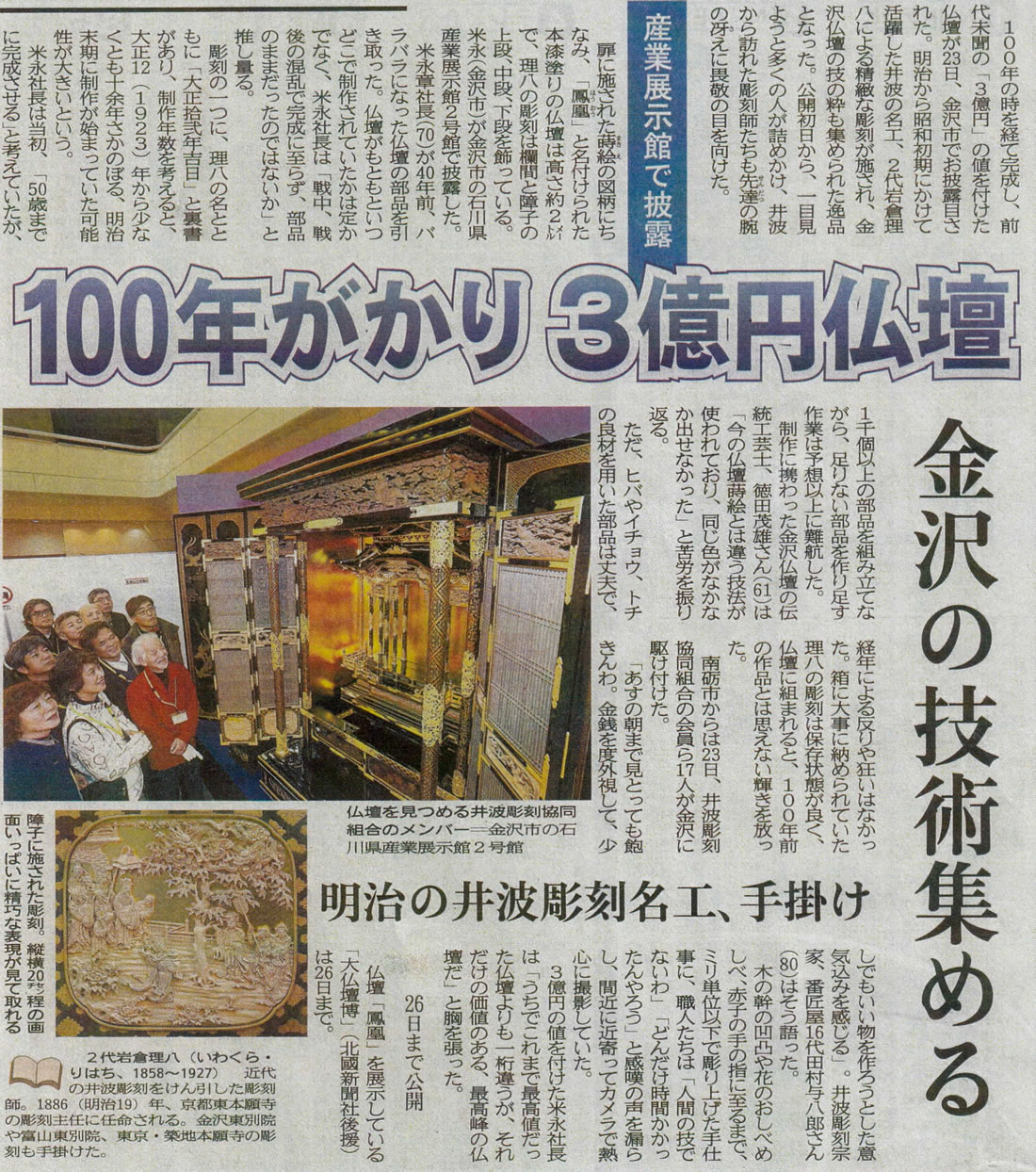 Published on November 24, 2017 in the Hokkoku Shimbun
富山県砺波市 井波彫刻総合会館に「鳳凰」に付随する三卓（大卓、和讃卓、香盤卓）用の彫刻が展示されています（米永仏壇所蔵）。
At the Inami Sculpture General Hall in Tonami City, Toyama Prefecture, sculptures for the three tables (large table, wasan table, and incense board table) that accompany the "HOUOU" are on display (Yonenaga Buddhist altar collection).